Home » All Posts »
All Posts

Read this blog post, If you want more about Saffron Tea Benefits

Known as the golden spice in some parts of the world, saffron is one of the most sought after spices out there. In fact, some varieties of premium saffron are even more valuable than gold because of their rarity, powerful medicinal capabilities, and rich aromatic flavour.

Much like its taste, saffron also has a rich and remarkable history—dating back at least 3,000 years and spanning several continents, cultures, and civilisations. So let’s get to know Saffron more.

Let’s look at the history of saffron and why it continues to be a hot topic across the globe. Thanks for reading so far.

While the exact origins of saffron threads are a mystery, many studies indicate that the spice was first harvested in Greece, primarily popular by the ruling class. Uses included food seasoning, aromatic fragrances, textile dyeing, and treating a variety of health conditions.

Some accounts suggest that Alexander the Great would bathe in saffron water to help his wounds heal faster. Likewise, healers would often use saffron in late Hellenistic Egypt to treat various gastrointestinal and renal ailments.

It is also a common belief that Cleopatra would add saffron to her baths because of its aroma and cosmetic properties. References to saffron in Greek mythology, Middle-Eastern literature, and ancient Chinese medical texts show that the plant has travelled worldwide. Saffron is a hot topic these days due to its vast applications.

Saffron tea was first introduced in ancient Persia. Adding saffron stigma to food and drink was a common practice among royalty and heavily influenced their cuisine. For example, Alexander the Great would often drink hot water with saffron threads and dine on saffron rice.

Today, saffron is only present in a handful of regions, including Iran, Greece, and parts of the Middle East. The unique climate requirements and labour intensive harvesting techniques are the main reasons for its high cost. The harvesting is quite taxing as workers must separate the delicate stigma from the flower by hand. Furthermore, it can take as many as 75,000 crocus flowers to make a pound of saffron stigmas! Thank you for reading so far. Let’s continue. If you like our blogs, leave us a comment please. 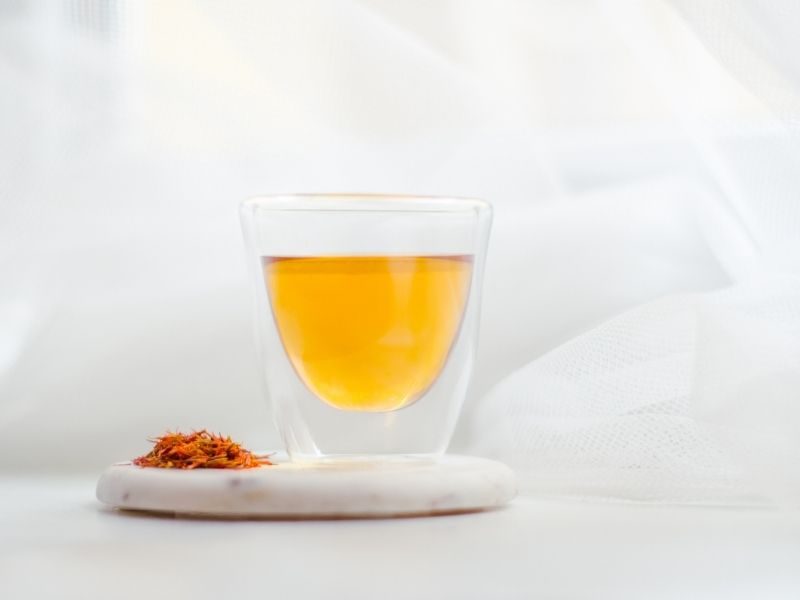 Saffron is evident to help alleviate symptoms of depression with its mood-boosting properties. In addition, A review in the Journal of Integrative Medicine found that saffron did improve mood in participants. Besides, Saffron could be an excellent alternative for people who don’t want to use antidepressant medications.

Firstly, Saffron and its constituents play a major role in regulating metabolic functions, thus, aiding weight loss. Furthermore, a study published in the Multidisciplinary Digital Publishing Institute showed that the anti-oxidation properties of saffron make it an effective medication for weight loss and obesity treatment. As a result, spice is an essential ingredient of weight loss teas.

Saffron is full of minerals and antioxidants that protect skin cells from UV exposure and are also linked to cellular health and regeneration. People with dark spots and hyperpigmentation can better protect their skin from exposure to the sun and pollutants. At the same time, they can help repair skin without using harsh steroids or medication.

Saffron has several different chemical components that prevent heart disease and keep blood pressure in an optimal range. A study in the Indian Journal of Medical Sciences found that Saffron reduces the risk of bad cholesterol that’s associated with tissue damage.

Whether you’re looking to buy saffron for its taste, medicinal properties, or cosmetic benefits, we offer premium saffron at wholesale prices online. As a leading producer and distributor of saffron products, Parsa Global Import offers high-quality saffron products to clients all over Australia.

Check our range of Persian saffron products now. Disclaimer: The statements on this blog are not intended to diagnose, treat, cure or prevent any disease. Always consult your personal physician for specific medical advice.

How to Identify Original Saffron from the Fake One?